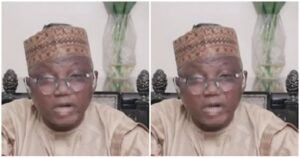 The presidency, on Tuesday, criticised the Northern Elders Forum (NEF) over a statement it said was released by the forum asking a section of the country to leave Nigeria.

In a statement by Garba Shehu, presidential spokesman, the presidency said only the elected leader of the country can make such a decision, adding that it is “delusional arrogance that would lead such a group to publicly state terms and conditions for the existence of our nation”.

“Nigerians listen to elected leaders, not opinionated tin-gods who have no traction with any responsible group,” the statement reads.

“Who gave them the right to ask for the exclusion, or expulsion of any one, group or section of the country from the Federal Republic of Nigeria?

“The Nigerian government does not take guidance nor invitations from such groups – only from the Nigerian people who put governments in office.

“Any group can refer to themselves as ‘leaders’, but in Nigeria, if you have not been elected by Nigerians to a leadership role, then you are not – and the government certainly doesn’t recognise you as such.

“Like many other countries around the world, Nigeria is feeling the strain of the current period of volatility and uncertainty.

“Now is not the time to seek to exacerbate divisions amongst Nigerians. Rather, we call on all Nigerians to come together and work to overcome the challenges we face as one nation, one people.”

But in a post on Twitter following the release of the statement, Hakeem Baba-Ahmed, spokesman of the NEF, denied that the forum issued such a statement.

“Northern Elders Forum did not release any Statement urging a group to leave Nigeria as is being circulated under the handle of @NGRP. NEF urges Presidency to take steps to protect its communication,” the post reads