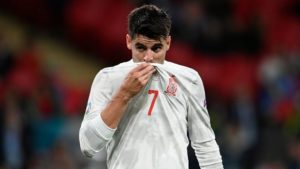 Luis Enrique said he was not sad and had no complaints with his squad after Spain’s Euro 2020 exit to Italy, praising the contribution of substitute Alvaro Morata.

Morata has come in for plenty of attention during the tournament – not always good – but the striker came on to score a late equaliser at Wembley on Tuesday, sending the semi-final into extra-time.