Zlatan: “I'll give you €500 for every time you get your first touch right tonight” “Go do your voodoo s***, you little donkey!”.

Lukaku: I will f**k u and your wife b**ch “He wants to talk about mothers? Son of a b****.” #InterMilan#derbydellamadonnina pic.twitter.com/qWm0WygVBV

Zlatan Ibrahimovic VS lukaku head to head on each other got us worried… This went too far! ✌️ pic.twitter.com/RY2XyNLKv8

Zlatan and Lukaku are going at it 😳 pic.twitter.com/yMLFI72tiz 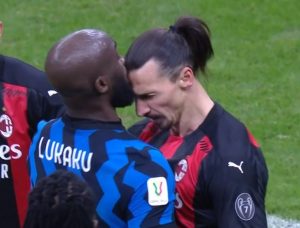 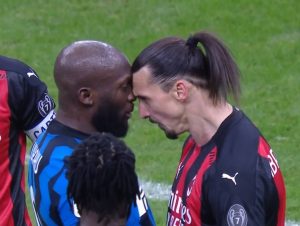 AC Milan’s Ibrahimovic and Inter’s Lukaku were both booked following a spat at the end of the first half, which continued into the tunnel during the interval.

The pair could be seen – and heard on television due to the San Siro being empty – exchanging insults as Lukaku had to be restrained by his team-mates as he attempted to confront the Swedish forward.

Ibrahimovic, who had given Milan a first-half lead, was sent off after picking up a second yellow card after the break, while Lukaku levelled with a penalty before Christian Eriksen struck a stoppage-time winner for Inter to send them through with a 2-1 win.

Ibrahimovic and Lukaku spent the 2017-18 season as team-mates at Old Trafford, with the Belgian having previously said he was able to learn from his fellow striker during that period.