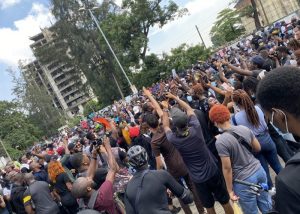 At least three people have been shot dead during a clash between thugs and police in Ibadan Oyo State capital on Tuesday, witnesses say.

PREMIUM TIMES gathered that police opened fire at hundreds of youth during #EndSARS protest Tuesday morning. As a result, some thugs launched an attack on a police station in Ojoo, Ibadan.

At least five protesters who were present at the scene told PREMIUM TIMES that six other protesters are severely injured.

The pictures and videos of the victims are also trending on social media.

The latest development has brought the number of death victims to no fewer than 16 since the beginning of the protest against police brutality.