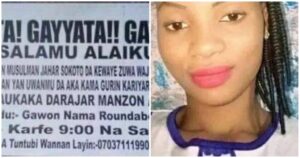 Some residents of Sokoto State will on Saturday embark on a “mass” protest against the arrest of two people suspected to be involved in the killing of a female student of Shehu Shagari College of Education, identified as Deborah Samuel, for alleged blasphemy.
SaharaReporters had reported how Deborah was violently stoned to death and later set ablaze by angry mob, who are mostly students of the college.

Following the incident, the police in Sokoto said two suspects had been arrested and taken into custody.
According to the Sokoto police spokesman, Sanusi Abubakar, the mob overpowered campus security before killing the female student and setting her remains on fire.

However, a leaflet obtained by SaharaReporters on Saturday, written in Hausa, asked Muslims to come out en mass to protest against the arrest.
“We’re inviting Muslims in Sokoto to come and help them rescue our brothers that were arrested because they were defending Islam and uplifting prophet Muhammad S.A.W,” the leaflet read.
“Gawon Mama Roundabout is where they’ll meet; Time: 9am. For more details call those numbers.”