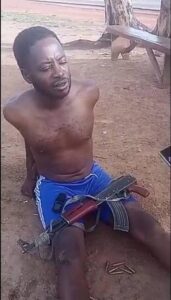 A Councilor elected for Kinkiba Ward of Soba local government area of Kaduna State, Abdul Adamu Kinkiba, has been arrested with AK-47 rifle on his way to deliver same to terrorists in one of the deadly forests in the State.

Kinkiba was arrested by the Mobile Policemen of 47 MPF Squad operating along Galadimawa axis of Giwa local government area of the State, when he was sighted suspiciously on a motorcycle and stopped for interrogation.

According to a vigilante member in the area, the suspect, Abdul Kinkiba said the gun was given to him by somebody who he refused to mention his name and was to be delivered to another person he claimed he also didn’t know his name.

The vigilante source said Kinkiba confessed that he was asked to stop immediately after the bridge near the Galadimawa forest (a known hideout for bandits) and that somebody will come out to collect the gun from him.

Confirming the incident, the chairman, Soba local government council, Engineer Suleiman Yahaya Richifa, who spoke to journalists and confirmed that the suspect is the current elected councilor in the council, declined further comment on the matter.

He simply said, “I’m in serious grief about the news, please allow me to overcome my shock.”

LEADERSHIP gathered that the suspect has been transfered to the Kaduna State Police Command for further interrogation.

Meanwhile, when the Police Public Relations Officer (PPRO), ASP Muhammed Jalige, was contacted, he promised to get back to our correspondent but failed to do so as at the time of filing this report.