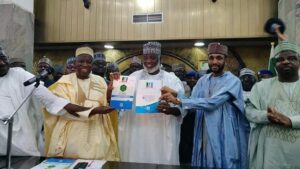 Another crisis is currently brewing in the Kano chapter of All Progressives Congress (APC) as the endorsed deputy governorship candidate, Murtala Sule Garo, is reportedly mulling defection.

Garo, the immediate past Commissioner for Local Government and Chieftaincy Affairs in the state, was endorsed by Governor Abdullahi Umar Ganduje and paired with current deputy governor, Nasir Gawuna (as governor) to fly the flag of the party in the 2023 gubernatorial election.

However, following a peace parley between Ganduje and Senator Barau Jibrin, a political arch-enemy of Garo from Kano North senatorial zone, Garo was said to have felt slighted.

Ganduje agreed to step down for Barau for Kano North senatorial ticket after the Senator abandoned his gubernatorial ambition.

Sources said Garo felt Barau, aside being his political enemy, played major roles as one of the leaders of the factional G-7 that has been trying to wrest the control of the party away from their camp and should not have been welcomed back to the fold after the Supreme Court judgment firmly placed the party in the hands of the governor.

It was gathered that the governor and Barau visited Garo at his residence in the midnight of Wednesday to settle the grievances and make him rescind his plan to dump the ticket and the party.

But sources close to the former commissioner said even after the meeting, Garo remained unsure with the arrangement and refused to give a definite answer as to the request.

“He is planning to meet with his associates and make concrete decision, but he is still very sad about the development (Barau back in the fold) but he has not defected or abandoned the ticket,” one source, who asked not to be named, said.

Garo is also said to be worried over the chain of defection hitting the ruling party in Kano, which many believe may affect the party’s fortunes in 2023.

It was further gathered that Garo may be considering joining the New Nigeria People’s Party (NNPP), which has been gathering momentum in Kano and has attracted many aggrieved APC bigwigs, including Senator Ibrahim Shekarau.

The national leader of NNPP, Rabiu Musa Kwankwaso, is an in-law to Garo and was instrumental in establishing him as a formidable politician in the state.

Kwankwaso brought him into the mainstream Kano politics as the Organising Secretary of the People’s Democratic Party (PDP) in 2007.