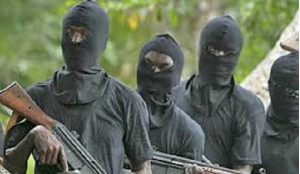 who has three wives and four children, said he was originally captured in the Federal Government’s Amnesty Programme for repentant Niger-Delta militants, but was stopped after three months because he refused to give kickback to his uncle who had helped him. And, in anger he contacted a soldier friend serving in Maiduguri who sold the gun to him at the cost of N300, 000 along with 88 rounds of ammunition.

“I was captured in the Federal Government’s Amnesty Programme before, and was being paid N65,000 per month, but my uncle who helped me to get the job said he wants to be collecting N20,000 from the money. “However, because I said no, he removed my name from the programme.

“I had bought the gun to fight the oil companies in our place, because they have refused to give us jobs,” he said. Highlighting his achievements since arriving Benin, Ogbadu said the Command has arrested 26 suspected cultists; 17 armed robbers; 11 kidnap suspects and six murder suspects.