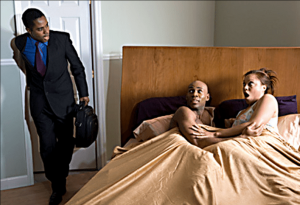 A South African man has raised eyebrows after he caught his wife cheating with another man on their matrimonial bed and started showering her with gifts.

The wife has cried out for advice because of her husband’s suspicious romantic gestures.

She narrated how her husband caught her pants down with another man and instead of reacting the generic way, nicely told her sidepiece to get dressed and leave.

According to her, she was expecting her husband to take drastic actions against her for being unfaithful, but he simply waived the conversation, stating that there was nothing he could do to change the incident.

The wife said after the cheating incident, her husband started treating her nicely, showering gifts on her and taking her out bi-weekly.

She, however, expressed concern because her husband is planning a baecation overseas for both of them before Christmas, and she is extremely worried that he would do something terrible to her on the vacation.