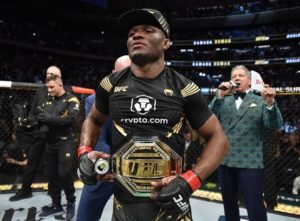 Kamaru Usman retained his welterweight championship with a hard-earned win over Colby Covington in the main event of UFC 268 at Madison Square Garden in New York on Sunday morning.

The ‘Nigerian Nightmare’ took the fight via unanimous decision after five tough rounds, though the champion’s 19th straight victory and a fifth successful defence of his belt was well deserved, given his superior striking power and the fact that he almost finished ‘Chaos’ near the end of round two after landing a couple of massive left hooks.
It’s a second win over Covington for Usman – the first arrived just under two years ago and was a classic in the welterweight division – and the fact that this fight went the distance and was again very evenly-matched suggests that this rivalry is not done yet.

“I know there was a lot of trash talk, a lot of bad blood here and I’m sure there’s still gonna be some after tonight, but this guy’s a tough son of a b****, he’s tough as s***. I wanted to get crazy, try get him out of there, but I knew with a guy like this, he’s gonna creep back in it and we’re gonna end up in a situation [going to the judges’ score cards] that we don’t want to be in,” said Usman after the fight.
He added, “I am the pound-for-pound best alive right now.”

The co-main event saw Rose Namajunas retain her women’s strawweight title with a split decision win in a rematch with Zhang Weili. While the pair’s first fight lasted less than 90 seconds earlier this year – with Namajunas claiming a stunning knockout – this one went the full 25 minutes and had the champ narrowly edging it on the score cards thanks to her superior ground game.

“I was pretty confident that I won it,” said ‘Thug Rose’ in her post-fight interview. “The first couple of rounds were pretty close, wasn’t sure what was going on, but I was just present in the moment and I wasn’t even too worried about the result.”

She added, “I had a feeling it was gonna be a way tougher fight… and she improved a lot, so I give her some props.”

The main card opened with Justin Gaethje overcoming Michael Chandler via unanimous decision in a lightweight match; before Shane Burgos out-pointed Billy Quarantillo in the featherweight division; and Marlon Vera defeated Frankie Edgar in a bantamweight clash, with the former claiming victory thanks to a front-kick TKO in the third and final round.
The next UFC event is a Fight Night at the APEX Facility in Las Vegas on the late evening of Saturday 13 November, headlined by a featherweight bout between Max Holloway and Yair Rodriguez.