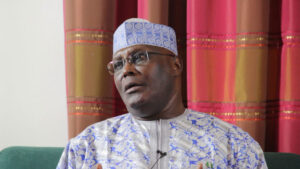 Former Vice President Atiku Abubakar has apologised to journalists, who were mistreated in Jos, Plateau State, by security operatives during his visit to delegates in the Tin City on Monday.

Leader of the Technical Committee Support Group of the Peoples Democratic Party (PDP) presidential aspirant, Chief Raymond Dokpesi, stated yesterday that Atiku could not have directed that the media be shut out of the event, as he has so much respect for the media and their role.

The technical committee is saddled with the realisation of Atiku’s presidential bid next year.

He denied the report by a section of the media that journalists were prevented from covering the former Vice President’s consultations in Jos on Monday with Plateau PDP delegates.

He said the presidential aspirant only pleaded that the media should excuse the meeting. He, however, returned for interviews after the consultation and apologised for the manner the security handled the situation.

Appealing to journalists not to misinterpret the intention of the former VP, Dokpesi noted that the media had always been part of Atiku’s agenda.

While appreciating journalists, he also cautioned against false narratives and what he called deliberate moves to blackmail the person of Atiku.

Journalists in Plateau were reportedly forced to vacate the hall when Atiku visited the PDP Secretariat, opposite the Nigerian Television Authority (NTA) in Jos, to meet the delegates.

Immediately Atiku and his supporters arrived, former Minister of Water Resources, Mrs. Sarah Ochekpe, was ordered to pray after the National Anthem was sung.

Then, Master of Ceremonies (MC) said that journalists were not welcome in the gathering.

Irked by the remarks, the Chairman and Secretary of the Nigeria Union of Journalists (NUJ) Correspondents’ Chapel, Peter Amine and Gyang Bere, told journalists to vacate the venue and go back to their respective offices.