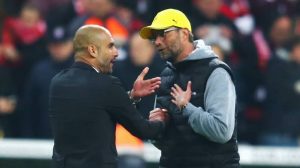 “I’m not scared, I thought Klopp is not that type of coach”>>Pep Guardiola hit back at Liverpool manager

Pep Guardiola says he is not scared of any of his Premier League rivals, but expects Liverpool to be at their very best against his Manchester City side on Sunday.

The former Barcelona and Bayern Munich boss has never won at Anfield in his managerial career but may never have a better chance with Liverpool losing their last two home games and struggling for form.

City, on the other hand, have won their last 13 matches in all competitions and a win would put a significant dent in the champions’ hopes of defending their title.

Guardiola was unhappy with Jurgen Klopp’s comments that City had a two-week break after a Covid-19 outbreak at the club, as he said he thought Klopp is not that type of coach but praised Liverpool and expects them to believe they will claim the three points.