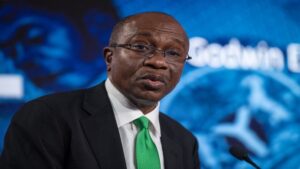 The Central Bank of Nigeria (CBN) has lamented that farmers refuse to pay back the loans obtained under the Anchor Borrowers’ Programme (ABP), believing it’s “national cake”.

“Many of the farmers refused to pay back their loans due to misconception that since CBN is the lender, the loan is a ‘national cake’ and they do not have to pay back what they consider theirs as citizens,” Sadeeq Ajayi, a spokesperson for CBN said on Wednesday.

Mr Ajayi said their refusal to pay back the loans have made it difficult for others to access the loan.

He said the inability of the apex bank to recover the loans from the defaulting farmers had threatened the scheme, adding that it has prevented other farmers from accessing the facility.

“While the Anchor Borrowers’ Programme has recorded some level of success, the failure of farmers to repay the loans has, however, been a major setback.”

Mr Ajayi that most farmers in Oyo State, who benefited from the scheme, have not repaid their loans.

He urged stakeholders, including the traditional rulers, to appeal to the defaulting farmers to promptly repay the loans for the sake of others.