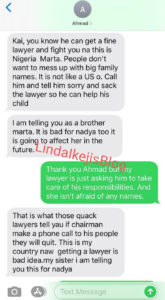 She told LIB: “He proposed to me after a while but said his family asked him to wait for 3 months before we could make it official.

“We started living together in Zone 4 Abuja.

“I met his brothers and few friends.

“One day he came back home from work and told me his mom said we should wait a bit longer on our wedding plans.”

While waiting to get married, they travelled to Dubai where she became ill and learnt she was pregnant in October 2011.

She continued: “He asked me if I can go to the US to have the baby and that he will join me later, so people won’t think that he is marrying me because I was pregnant.”

However, when she got to her sister’s house in the US, she stopped hearing from Abubakar.

“Through out the period I was pregnant, he didn’t call or text.

“After exhausting all means to reach him personally, I called his brother, who he had brought to my house to ask for my hand in marriage, and told him Abubakar had abandoned me and his unborn child.

“His brother pleaded with me not to go public about my pregnancy because of their reputation but promised to get Abubakar to call me,” she said.

She added that Abububakar finally called and “he told me once we have our daughter, he will introduce us formally to his family.”

He didn’t follow through on this promise, Marta said.

“Through out my pregnancy in the US, I got no help from him. 5 month after our child was born and after so much of pleading he finally sent money for renting a house.

She added: “He hasn’t kept his promises about coming to the US or financial support.”