She was in Borno state where she interacted with some members of resettled Ngarannam community in Mafa LGA in the state.

A Nigerian Journalist working with HumAngle, Murtala posted her pictures on Twitter with her personal security guards.

The pictures generated a lot of reactions from Nigerians. Some see it as a shame to Nigeria that the minister doesn’t trust Nigerian security personnel to protect her, while others see it as a wake up call for Nigerian government.

Here are some of the reactions:

“Insecurity is not about lack of personnels in Nigerian army, Nigerian army has been compromised, insecurity is what the rich northerners are using to fight their own people, their religion permits it” said Rollo.

“I see and feel this as an insult. The united nations Secretary General came and his security details were not this arm to teeth. Some Europeans feel that they are better than others.” Mahmud Musa said.

“On a second thought. What is Germany 🇩🇪 looking for in Borno? Is this the reason why that state has seen an untold amount of terror and hardship? What minerals does borno state possess? Why bring in such artillery weapons? SOMETHING IS NOT ADDING UP!” Oduma Said. 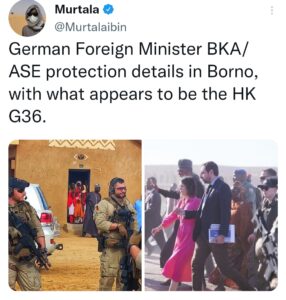