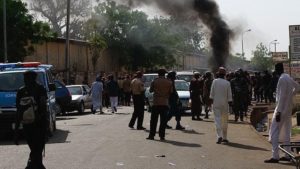 It’s a fragile zone that has seen inter-communal conflicts in the past,” Abarchi said. “They are now going after civilians, which … could set the zone on fire.”

The security crisis will land at the feet of President-elect Mohamed Bazoum, who takes office next week, succeeding Mahamadou Issoufou.

“How is it that 200 people can move around on motorcycles and no one is aware?” he said.

“These forces need to surround these zones so that we know when there is a massive movement.”

The government said it is investigating the attacks.